Crusty Demons: Imagine a group of motocross daredevil riders performing epic stunts and shows across the world, creating over 20 motocross-centric films, media productions and personally turning freestyle motocross into what it is today.

Who are the Creators of Fleshwound Films?

Jon Freeman and Dana Nicholson are the masterminds behind the group’s inception in 1994. With riders coming from New Zealand, United States, Australia, and Europe, the Crusty Demons’ group is a collective of some of the best riders in the world, as well as the ever so popular “Crusty Demons of Dirt” film franchise.

Both Freeman and Nicholson have pioneered the sport into what it is today: Freestyle motocross, and motocross in general, was hugely impacted by the Crusty Demons’ worldwide legendary status, innovation, and promotion of the sport.

With backgrounds in the snowboarding and filmmaking communities, Freeman and Nicholson had lived that punk rock lifestyle that shaped the freestyle motocross (FMX) culture in the early days, and that has directly impacted the sport’s growth since.

In fact, after the release of their first films, there was an explosion of interest into the sport of Motocross as well as FMX around the world, with hundreds of thousands of copies being sold after their initial release.

In the coming years, the Crusty Demons’ fan base grew spectacularly, with nearly everyone around the globe who was into Moto X having a copy of the “Crusty Demons of Dirt” films. They were just that popular, and that popularity hasn’t died down, as the Demons’ still are hosting shows and events across the world.

The Crusty Demons became a group of highly skilled motocross riders, and inspired a new wave of action sports films. In the mid-nineties, interest in the sport of motocross did not have much notable growth, but that all changed when Crusty rolled into town.

Around that same time, both Nicholson and Freeman were working on the film that would eventually become the start of the Crusty Demon’s enterprise. Fleshwound Films’ first film, the “Crusty Demons of Dirt”, included some of the most monumental moments in FMX history, from 145 feet plus jumps, riders soaring close to 50 feet high into the air over everything from sand dunes, houses, cars and everything else imaginable. Every film since has focused on different riders, moments and iconic  jumps and shows, and a comprehensive overview of the FMX lifestyle.

A turning point happened after the release of the third Crusty Demons’ of Dirt installation in 1997. CD rider, Brian Jordan, better known as Lofty, shared his idea with the Crusty Demons founders with the idea of hosting a freestyle motocross competition, something that hadn’t been done to the scale he had suggested. Four months later, Las Vegas played host to the very first free style motocross competition, but it wasn’t to everyone’s delight.

As with any great innovation or idea, there are always people who would rather not see it succeed. There were a number of people who looked down on the freestyle discipline of motocross, and confidently said it would never take off, and that this revolutionary competition would be a spectacular failure.

But if there is anything you should know by now about the Demons, they don’t take no for an answer, and they sure as hell don’t allow others to dictate what they can and cannot do.

The Crusty Demons turned FMX from a niche sport into a way of life that was recognized for the skill practice and endurance it takes to do, and did so in a way that couldn’t; help but draw people in and give them something to be inspired by. The sheer awe of seeing man and machine become one close to 300 feet in the air before skillfully landing on the ground is something most people would never be able to do.

That’s what draws people, the wonder, the amazing and the powerful connection to the extreme. It’s what the Crusty Demons live and breathe for, and to the rest of the world, their insane bravery is something we can only look at in sheer amazing and inspiration.

Today, the Crusty Demons are still traveling the world, doing hat they do best and showing  the world just how inhumanly skilled they are. We’ll be sharing more in the coming weeks on all things Crusty, and you can be sure that FMX will never be the same to you once you take a look into the world of the Demons’ of Dirt.

Are you into extreme sports and have an exciting video you would like to share with the world and get more exposure?  Look no further than our OTT streaming community of extreme sports enthusiasts, content creators, athletes, and fans! 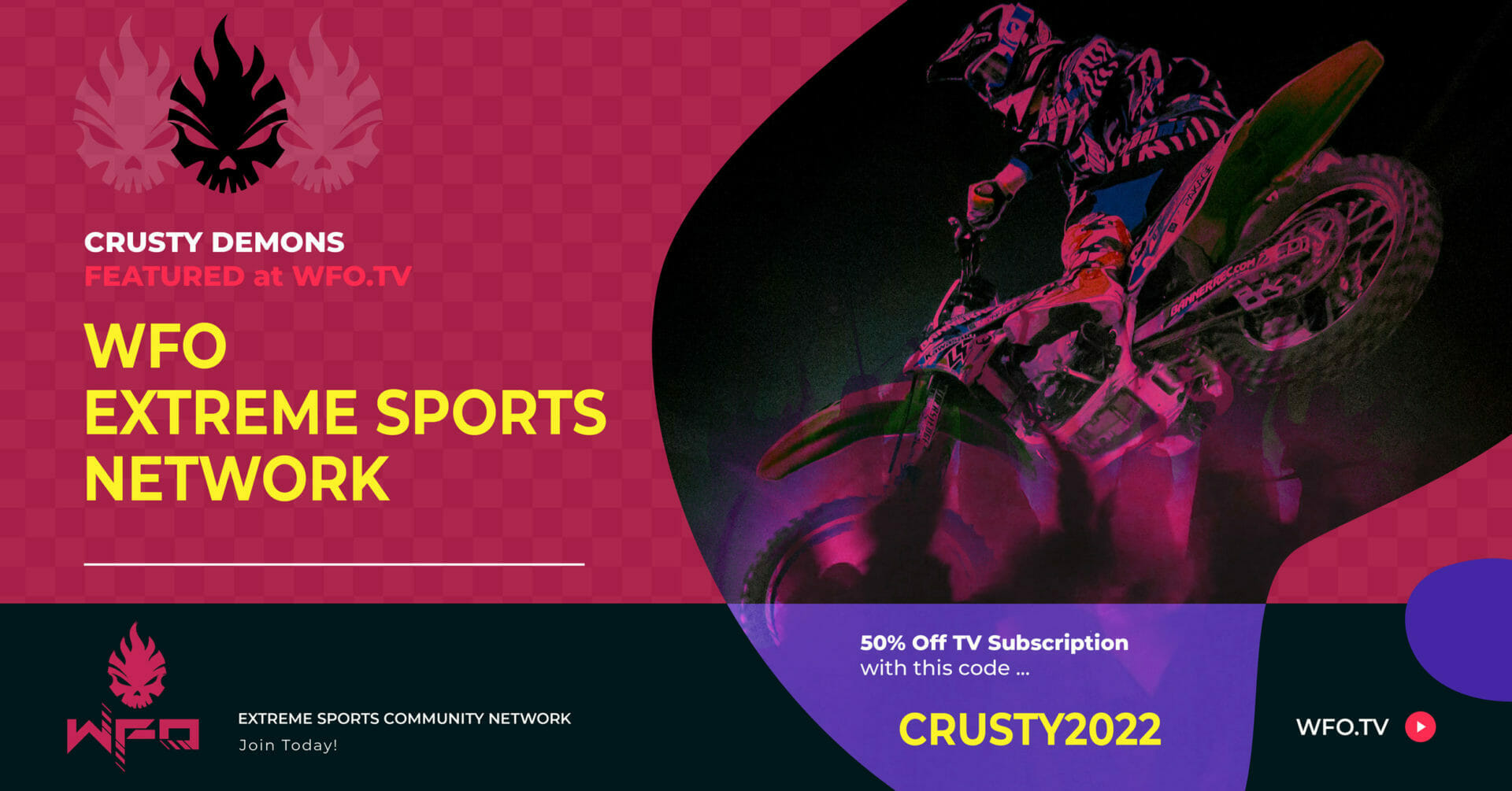